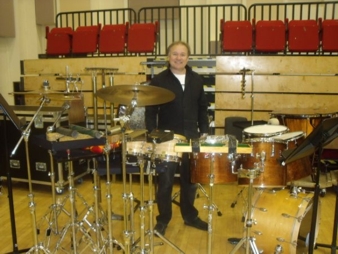 Paul`s interest in percussion began at an early age when he became a member of the Cheltenham Sea Cadet Corps Drum and Bugle Band whilst still at school.He graduated from the Royal Academy of Music where he studied with the renowned James Blades and then freelanced with many of the London orchestras before joining the Sadlers Wells Royal Ballet Orchestra in 1979.
He then joined the BBC Northern Symphony Orchestra which soon was renamed the BBC Philharmonic  and then was offered the position of Principal Percussion - a post he has now held for over 30 years . Whist at the BBC , Paul has worked closely with many of the worlds greatest composers including Sir Peter Maxwell Davies ,Luciano Berio ,HK Gruber and James Macmillan and has collaborated with them to create many new and exciting percussive sounds for the 21st century.

In addition to his busy schedule with the BBC ,Paul is Head of Percussion at Chethams School of Music ,Senior Lecturer at the Royal Northern College of Music  and the University of Manchester  and is Director of his percussion hire company - Patrick Percussion which operates in Manchester and in London with Paul`s son Oliver who has followed his father in the world of percussion and has graduated recently from the Royal College of Music
He has also acted as Percussion  Consultant for many years for  the BBC Young Musician of the Year competition

"I have great pleasure in endorsing the Centre Stage range of Timpani and percussion instruments .They have a sound of the highest quality across the full range of instruments and careful attention to construction details has delivered instruments built to withstand all the rigorous requirements of todays modern musical situations

Centre Stage instruments are definitely a most welcome addition to the choice of timpani and percussion instruments available to both amateur and professional players."

Mikkel started his career from the age of 5 in the local marching band in Skaelskor. There he was tought the basics of drumming and soon he became one of the youngest leaders there has been in the drum corps in Skaelskor Marching Band.  At the same time Mikkel took lessons at the local music schoool in drum kit and classical percussion. He continued his career in Chapean Brass Band and not long after he was accepted in the National Youth Brass Band of Denmark at the age of 13.

From the age of 14 Mikkel joined the percussion section of Lyngby Taarbaek Brass Band, and shortly after he was a part of team that won the Danish nationals. This was the start of a period with 9 Danish national titles, 12 European appearances and simultaneous entertainment prices. In 2010 Mikkel was contacted by the Fairey Band from Manchester and was asked to join them at Brass in Concert, and since then he has been a regular member at all major contests. Mikkel deputises for other brass bands all over Europe, such as: Stavanger Brass Band, Öresund Brass Band, Concord Brass Band and Pemberton Old Wigan Band.